… is a proud, compact sturdy little dog that makes an ideal companion for young and old in today’s modern world, adapting well to both city and country living. He expects the attention which he considers his due and enjoys a brisk walk to investigate the new smells in the neighborhood. He is very inquisitive and a delightful clown and surveys the world with supreme self-confidence and good humor.  Sealyhams are most charming and lovable, giving their owners endless love and devotion. 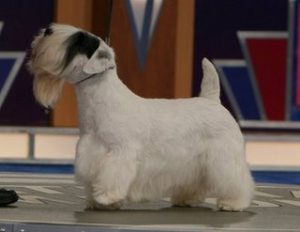 While devoted to his family, he is never servile, even when being disciplined. He will rarely, if ever, cower, for he is possessed with an indomitable spirit and immense pride. He owns, he is not owned by his family. Once he has taken his place in the household, he is virtually assured of equal status.  The Sealyham’s temperament has remained one of his most distinctive traits — friendly and lovable, responsive to human contacts, a constant, loyal and devoted companion. Having had one Sealyham in a home is to be satisfied with no other breed, and that is the finest tribute that can be paid to any breed.