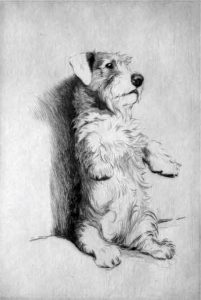 The Sealyham Terrier derives its name from Sealyham, Haverfordwest, Wales, the estate of Captain John Edwardes, who developed from obscure ancestry a strain of dogs noted for their prowess in quarrying badger, fox and otter.  It is believed he started developing the breed around 1848.  He kept no records, but a noted student of dog breeds in Wales surmised that the original terriers were probably descendants of white-haired terriers which Edwardes’ Flemish ancestors brought to Wales at the time of the Norman Conquest.  It is also assumed he used the small white terrier resembling a bull terrier which is now extinct; also the Dandie Dinmont to shorten the legs, and the West Highland White Terrier to set the white color.  White was necessary to distinguish the Sealyham from the varmint he went to ground after, so when he came out of the hole smelling like a varmint, the hounds could tell the difference.  We will never 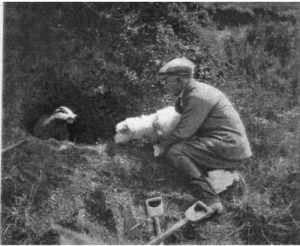 know for sure, but despite all differing views, it is clear that the Sealyham Terrier with his mixed ancestry adds up to a remarkably attractive terrier just as comfortable in the modern world as he was in the fields of Welsh estates.  The Sealyham’s first recorded show appearance was in 1903 at a local affair in Wales and the breed was first imported to the U.S. in 1911.  Since AKC recognition, the Sealyham has occupied a solid niche in the canine community.  Though small in population, the Sealyham has made many trips to the winner’s circle, scoring over representatives of far more numerically popular breeds.  The breed has garnered boosters throughout the world, with fine Sealyhams in the show rings and serving as family companions in many countries. 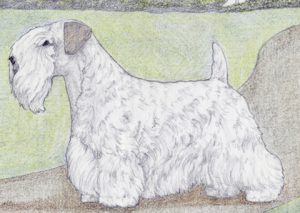 Sometimes called the “couch potato” of the Terrier world, the Sealyham to it’s fans is most often claimed the best kept secret in dogdom.  One of the most biddable terriers, it’s said that the charm and humor of the breed will routinely add to the joy in the owner’s life and make the owner forget when the Sealyham does not obey, or teaches their human a new trick.  A celebrity and royalty favorite dog in the 1930’s, the breed has regressed to a very rare sight.